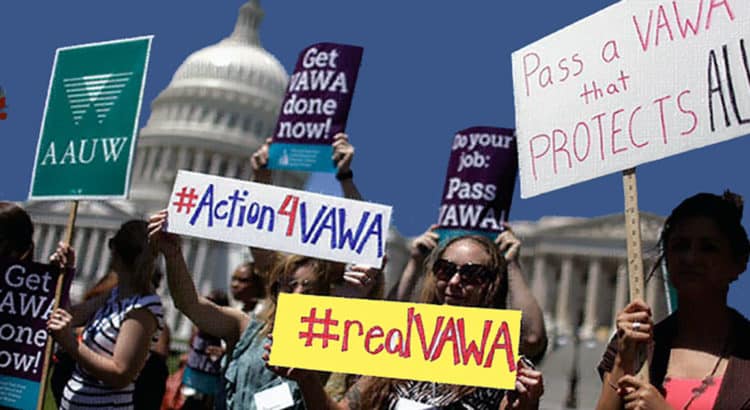 The federal Violence Against Women Act (VAWA) is up for reauthorization in 2005. VAWA funds billions of taxpayer dollars to combat violence against women, principally domestic violence (DV).

The definition of DV touted by victim advocates runs the gamut from jokes and insults to murder, with “power and control” being the overriding characteristic of the man’s behavior towards the woman. Real violence is rarely at issue.

When women commit violence against men, VAWA and the DV industry go AWOL. Despite the federal government’s own statistics showing nearly 40 per cent of domestic violence victims are men, VAWA persists in its monolithic response.

In the same way that some minority groups argue they cannot be racist because they aren’t in power in society, gender feminists contend women cannot commit DV because they can’t assert power and control over men. Any violence committed by women is, by definition, either de minimus (it could not possibly have hurt him), or self-defense (SHE is the victim of HIS abuse).

All interactions between partners are subject to this twisted logic. When the relationship sours, the woman has an easy out: “I am a victim of domestic violence and can do no wrong.” VAWA supports and maintains female supremacy. It should be re-titled Victory Assured for Women Act.

The centerpiece of the system is “mandatory arrest.” Every domestic disturbance call must result in arrest, usually the man. Domestic violence is whatever the man does that the woman doesn’t like.

Unknown to most men, such interchanges often precipitate false charges of DV. In my 17 years as a family law attorney, I have seen this pattern occur over and over.

Even when the facts clearly show the man is not an abuser (and perhaps the woman is), prosecutors refuse to drop charges.  No-drop” policies are a great publicity tool, and a way to ensure more funding. Charges that would never see the light of day if they happened between strangers on the street (accidentally bumping against someone when walking by), are routinely charged as DV “assault.” (But only if the man does it to the woman; a man can be bleeding from a head wound and he won’t be considered a victim). Indiscriminate charging clogs the system with minor transgressions, yet ensures a steady stream of cases justifying more taxpayer money at budget time.

Both spouses are usually at fault when a marriage ends. Many women have discovered a surefire antidote against taking any responsibility: playing the domestic violence victim. While the husband is reading the newspaper and relaxing after work, the wife is contacting the domestic violence hotline, getting step-by-step instructions on what to say:  “His abuse is escalating,” “I’m fearful for my safety.”

VAWA funds battered women’s shelters and their misandrist staff, always ready to welcome another customer for their anti-male, anti-father and anti-family agenda.

Ask a victim advocate what causes domestic violence, and she will immediately blame our “patriarchal society,” ensuring that only men get the blame. One might ask what causes women to abuse children. Presumably, the patriarchy by proxy.

VAWA gives short shrift to child abuse, which is most often committed by women. Indeed, VAWA earmarks a paltry $7000 per year to develop home visitation projects to look for signs of child abuse or neglect.

To assure victory in the divorce/custody case, the woman claims the man is an abuser, no matter how good a husband and father he is. Whatever wrongs he has committed, from leaving the toilet seat up to not making enough money, failure of the marriage is his fault.

“No-fault” divorce laws really mean “no fault unless it’s the man’s fault.” In other words, the Oprahization of family law.

What we really have is MAWA: Men Annoying Women Act. The man is either a relentless abuser or a hopeless wimp. Any modern man not terrified of being in a relationship with a woman has not been paying attention.

The government seems unable to define gender bias except as “bias against women.” Title IX forces college sports programs to spend equal amounts of money on men’s and women’s sports, despite the fact that the vast majority of athletes are men.

Even though 1/3 of domestic violence murder victims are male, not one dime of VAWA’s largesse is devoted to prevention of violence against men.

Men are far more likely than women to be victims of violence overall, yet there’s no Violence Against Men Act. Men also comprise nearly all workplace injuries and deaths, but try to find a Male Workplace Injury Prevention Act.

VAWA is not about stopping violence. It is about greedy special interests slopping at the federal trough, perpetuating gender supremacy for women. If proponents were truly concerned about helping victims, they would demand that all intervention and funding be gender neutral and gender inclusive. The existence of male victims threatens gender feminists because it knocks the underpinnings out of their theory, that the “patriarchy” causes men to abuse women.

The DV industry has succeeded in creating the “victimarchy.” With VAWA in their corner, women win no matter what: victim or abuser, they can do no wrong.